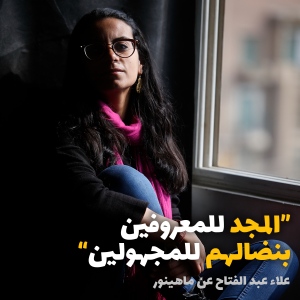 Campaigning lawyer Mahienour el-Massry and leading trade unionist Moatasem Medhat have been jailed for two years by an Egyptian court, for breaching a law on public gatherings imposed by the British colonial authorities in 1914. Mahienour and Moatasem have been in jail since their trial in November and will appeal the sentence on 13 January. Lawyers Asmaa Naeem and Waleed El Ammary, and activist Ziad Aboul Fadl also received three year sentences in absentia. In addition to the 1914 Assembly Law, the prosecution claimed the defendants breached the repressive 2013 Protest Law, engaged in “thuggery” and “insulted the President”. The only witness for the prosecution is a police officer, whose written report on the incident stated that the defendants had left before he arrived at the scene.

The charges against Mahienour and Moatasem and their colleagues relate to a demonstration during the wave of protests against the transfer of the Tiran and Sanafir Islands from Egypt to Saudi Arabia, but it is clear that the real goal is to lock up campaigners who put themselves at risk to defend workers and activists persecuted by the authorities.

Mahienour, an award-winning human rights lawyer, is well-known for her work defending activists, trade unionists and Syrian refugees from persecution by the authorities. She was jailed in 2015 in a case connected with protests over the acquittal of policemen charged with the murder of Khaled Said, the young Alexandrian man whose death in 2010 sparked the protest movement which paved the way for the 2011 uprising. While in prison she was awarded the Ludovic Trarieux International Human Rights Prize for her work defending so many people ground down by Egypt’s oppressive judicial system. Even in jail she continued to fight for the rights of her cell-mates, many of whom were working-class women jailed for debts they couldn’t pay. 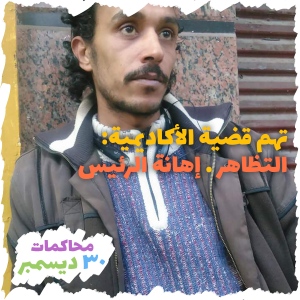 Trade unionist Moatasem Medhat provided evidence to the court that he was not even present at the protest, yet has received a two-year jail sentence. A member of the Bread and Freedom Party, Moatasem is one of the founders of the independent trade union at the Lord Company shaving equipment factory, serving as secretary to the union before being victimised and sacked for his trade union activism. He is also a key figure in the Permanent Conference of Alexandrian Workers, a regional federation of independent unions, and has served on the federation’s executive since 2014. Through the federation he fought for the reform of Egypt’s restrictive trade union and labour laws and helped to organise a campaign to save jobs in the textile industry. Since his dismissal from Lord, Moatasem has been working as a security guard and storekeeper in the tourism sector. He is married with one child.

Mahienour and Moatasem are only two of tens of thousands jailed on trumped-up charges by Abdelfattah al-Sisi’s authoritarian military regime. Amnesty International details how the Egyptian authorities used “mass arbitrary arrests to suppress demonstrations and dissent, detaining journalists, human rights defenders and protesters, and restricted the activities of human rights organizations”, as well as engaging in torture, extrajudicial killings and persecuting people assumed to be LGBT+ in a homophobic crackdown on “debauchery”.

Supporters of the defendants who gathered in front of the court on 30 December to hear the sentences were also attacked by the police. Mustafa Tawfiq, Muhammad al-Hadidi and Haythem El-Deeb were arrested after Tawfiq and El-Deeb were severely beaten.