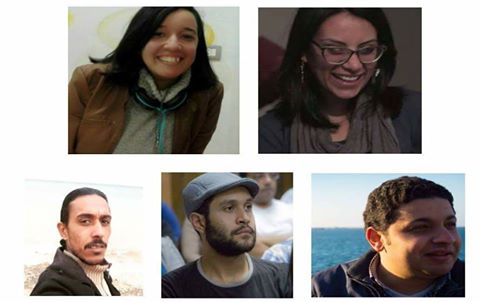 Award-winning human rights lawyer Mahienour el-Massry is behind bars again, alongside co-defendant Moatasem Medhat, awaiting trial in a case against a group of lawyers and activists which will be heard on 30 December. Judges in the Montaza court in Alexandria remanded them in custody following a hearing where the other defendants in their case were not present. Mahienour, along with Asmaa Naeem (human rights lawyer), Waleed El Ammary (lawyer and member of Al Dostour Party), Zeyad Aboul Fadl (member of Bread and Freedom Party), and Moatasem Medhat (member of Bread & Freedom Party), is charged with protesting against the transfer of the Tiran and Sanafir Islands to Saudi Arabia, illegal gathering, insulting the president and thuggery.

Egypt’s harsh anti-protest laws criminalise most forms of dissent, and lawyers, human rights campaigners and journalists who challenge the repressive system in the course of their work often also face persecution themselves. In 2015 Mahienour was jailed for over a year in a separate case between relating to protests over the murder of Khaled Said by police in Alexandria, while in prison she was awarded the Ludovic Trarieux International Human Rights Prize for her work defending so many people ground down by Egypt’s oppressive judicial system. On release from jail, she threw herself back into work, taking up the case of her colleague Mohamed Ramadan, who was also facing politically-motivated charges.