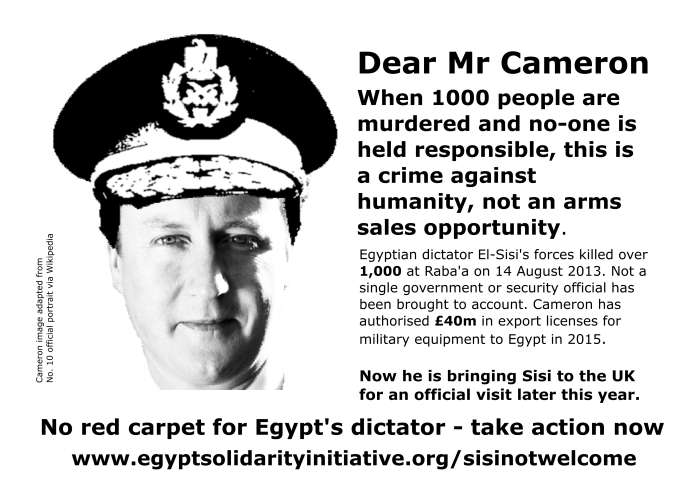 Two years after the killing of around 1,000 protesters at Raba’a al-Adawiyya and al-Nahda Squares in Cairo by Egyptian security forces, not a single government or security official has been held responsible, Egyptian and international human rights organisations said today. Human Rights Watch, which labelled the events a “likely crime against humanity” in a report documenting the killings last year, called on the United Nations to establish an international inquiry into the massacre. Joe Stork, HRW’s deputy Middle East director condemned the US and European governments for resuming arms sales to Egypt, adding:

Washington and Europe have gone back to business with a government that celebrates rather than investigates what may have been the worst single-day killing of protesters in modern history,”

The Egyptian Initiative for Personal Rights (EIPR) called the events at Raba’a and al-Nahda “the worst and greatest massacre in Egypt’s history since independence”, noting that the security forces continue to shoot and kill protesters today.

Meanwhile, arms sales from Britain, France and the US to Egypt are booming. Figures obtained by Campaign Against Arms Trade (CAAT) last month show that arms exports from the UK to Egypt increased by over 3,000 percent this year, bringing the total value of export licenses to £56 million since August 2013. France has agreed an arms deal worth £3.68 billion for 24 Rafale fighter jets – some of which were on show at Sisi’s triumphal celebrations over the completion of the extension to the Suez Canal on 6 August. The US delivered new Apache attack helicopters last December.