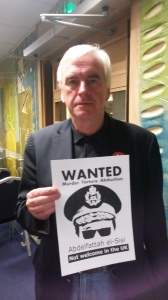 Trade union leaders Mark Serwotka and Dave Ward confirmed their backing for the campaign against the visit of Egyptian dictator Abdelfattah el-Sisi to the UK following a packed meeting on 29 July against new anti-trade union laws proposed by David Cameron’s Tory government. Mark Serwotka, general secretary of the civil servants union PCS, and Dave Ward, general secretary of the Communication Workers’ Union CWU added their names to the statement against the visit. They join leading figures from Unite, the biggest union in the UK and Ireland which is also backing the campaign: Mark Lyon, chair of Unite’s International Committee and Unite’s national president Tony Woodhouse have also pledged their support. John McDonnell MP, who was also speaking at the meeting and is a key supporter of the campaign against Sisi’s visit said:

“This is a visit of someone with a record of oppression of human rights and of trade union rights. We shouldn’t allow him to come to our country and desecrate our soil”

Britain’s Tory government is proposing a raft of changes to trade union laws designed to make it more difficult for workers to take legal strike action. These include laws banning strikes by workers in “essential” services, restrictions on picketing, and legal opportunities for employers to bring in scab labour to break strikes.