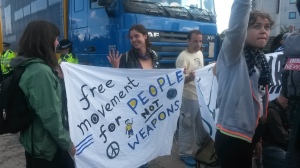 Stop the Arms Fair and Campaign Against Arms Trade (CAAT) held protests outside the ExCel centre in London during the past week. The ExCel centre is yearly host to one of the world’s biggest arms fairs (DSEI arms fair). Weapons manufacturers congregate to sell military equipment to some of the world’s most repressive regimes. In the past, the DSEI arms fair has reportedly stocked torture equipment.

The week long protest was successful in blockading roads and stopping military vehicles from entering the site. Egypt Solidarity Initiative was invited to speak about UK arms deals with the Egyptian dictatorship, and to raise awareness of Al-Sisi’s invitation to the UK. We had this to say on the day: 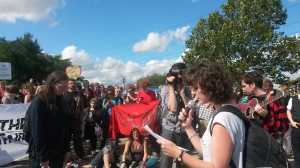 “Al-Sisi’s government arrested 761 students and killed 3 in the 2013 attempt to stop protests. 89 students were made to stand trial at military courts in the last academic year. David Cameron has invited Al-Sisi to London. When he made the visit to Germany, he and Angela Merkel discussed business and investment, turning a blind eye to the Human Rights abuses he is committing. The UK government plays a large part in arming the Egyptian military, such as the massacre of 1000 people in Raba’a and Nahda Square in 2013. These arms are used against peaceful protestors. We at Egypt Solidarity along with the backing of MENA solidarity, Bahrain Watch and the UCU, PCS and NUT unions are campaigning against this and working to expose the UK’s complicity in Egyptian and Middle Eastern human rights abuses.”

Egypt Solidarity then joined tens of thousands of people in the ‘solidarity with refugees’ event. Campaigners marched from Marble Arch to parliament square holding banners and placards with slogans like “tell Cameron Refugees welcome here” and “happy to share”. Similar protests took place in other European capitals.

An overwhelming number turned out to march in solidarity with refugees and to push David Cameron to accept more people into the UK. Websites are being set up to match people willing to share their homes with refugees. The German group “Refugees Welcome” commented on the solidarity shown saying: “we are overwhelmed by people’s readiness to help”.

Campaigners in London were met by Jeremy Corbyn MP, now leader of the Labour party. As one of his first public speeches as Labour leader, Corbyn spoke about the importance of solidarity: