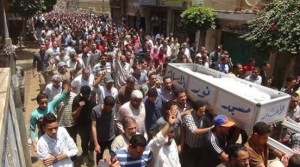 Mourners in Qalyubiyya governorate at the funeral of Hisham Al-Khafagi, killed by security forces in 6th October City -‘picture via FJP on Facebook

Leading members of the Muslim Brotherhood, including former MP Nasser Al-Hafy and Abdelfattah Mohamed Ibrahim, head of the organisation’s committee to support the families of political prisoners and martyrs, were killed in “cold blood” by the security forces on 1 July, the Brotherhood said in statement. The men were meeting in an apartment in 6th October City which was raided by police, who claimed to have been attacked by armed “terrorists”. Nine people were killed by the security forces during the raid.

Sisi’s response to military setbacks in Sinai has been to declare war on his civilian opponents, including many already in jail under sentence of death. He demanded that the courts speed up the process of carrying out executions by removing appeal stages, while the cabinet rushed through a further round of anti-terrorism laws. Although existing laws have been widely criticised for relying on vague definitions of terrorism, and targeting entirely peaceful acts of opposition, the latest round of legislation is even more draconian. Among the changes are mandatory death sentences and life sentences for a raft of offences relating to organisers and funders of “terrorist organisations”. Sisi is also targeting the Criminal Procedures laws for revision, after the government’s arguments that hearing defence witnesses should be left to the discretion of the court were rejected by the State Council in March this year.