Activists in Korea are mobilising for a protest at the Egyptian embassy this Friday as part of a series of international solidarity actions for political prisoners and against repression, disappearances and executions. We spoke to Jong Kim, one of the protest organisers, about the goals of the demonstration. 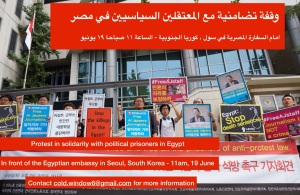 Who is organising the demonstration?

At the moment there are about 6 organisations that are organising the protest. Some of them are human rights organisation, some are peace activists and some are political organisations. Many of us were also involved in previous protests in front of Egyptian embassy, for example, the ones that were against the crackdown in Jan.-Feb. and Sep. 2011, the one condemning the Aug. 2013 massacre, and the one that took place last year against anti-protest law and demanding the release of Al Jazeera journalists.

Why do you think it is important for activists in Korea to join the
international protests?

First of all, the repressive situation in Egypt is beyond anyone’s
tolerance. Mass death sentences, harsh sentences against activisits and journalists, systematic police torture and depriving prisoners of their rights to stand fair trial, etc. And the last year’s experience actually showed that international solidarity does make difference.

Second, Egyptians have manifested their the political potential and courage during the 2011 revolution and I believe the Egyptians deserve much better political situation and much more freedom.

However, the President of Korea, Park Geun-hye, is supporting Sisi
government. Last month, she actually wrote a letter of amity to Sisi saying she wants to solidify mutual cooperation with Sisi. Clearly we cannot let such terrible position to represent of how Koreans feel about the Sisi regime and the Egyptian revolution. We have to make clear that Korean people are against the Sisi regime’s repression.

Third, I believe the stake on Egyptians’ struggle against their dictator is not just confined to Egypt or the Middle East but extends to whole globe including Korea. If Egyptians turn the tide and achieve a step forward, it will again have huge positive impact on Korea. We and our struggle against respective rulers are all connected, especially in a time of severe economic depression. Therefore defending the political prisoners in Egypt can also contribute to struggle in Korea.

What you can do: join the international protests. Find out more here.