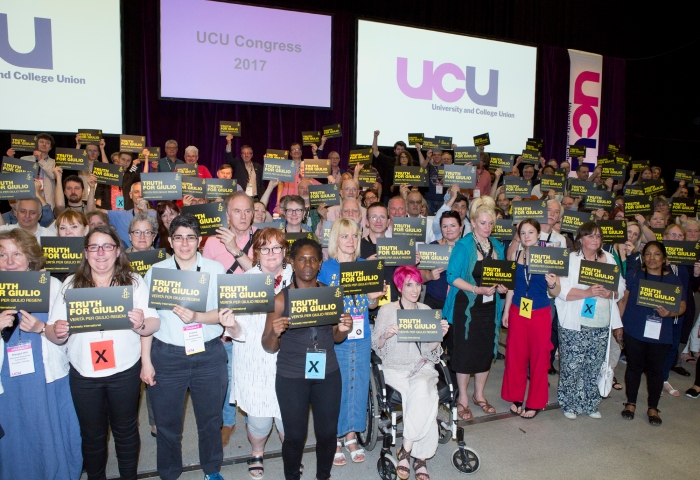 The issue of forced disappearances and other human rights violations was high on the agenda at the annual congress of lecturers’ union UCU, held in Brighton on 27-29 May. The union pledged to continue support for the Truth for Giulio / Justice for Egypt’s Disappeared campaign in a resolution, while delegates heard a report back on a nation-wide series of meetings and events co-organised with Egypt Solidarity Initiative and Amnesty International at a well-attended fringe event.

“Following a series of well-attended campus meetings up and down the country, UCU members have reaffirmed their support for the Truth for Giulio campaign,” Rob Copeland, UCU’s International officer told Middle East Solidarity. “In conjunction with Amnesty UK and the Egypt Solidarity Initiative, we will continue to call for justice for all of Egypt’s Disappeared and an end to torture and impunity in Egypt.”

Up and down our nations and regions Amnesty International student and local groups have come together with UCU branches to campaign on our campuses and in our communities. Progress in holding the Egyptian authorities to account is painfully slow, but progress is being made. Italian prosecutors have now identified a list of individuals that may be implicated in Giulio’s vile abduction and torture.  There is no doubt that without your persistence and the insistence of Amnesty supporters in Italy this crime would have been swept under the carpet, like so many others.“

As we widen our campaign out to involve more union partners, we will insist on accountability from the authorities and an end to torture and impunity”.