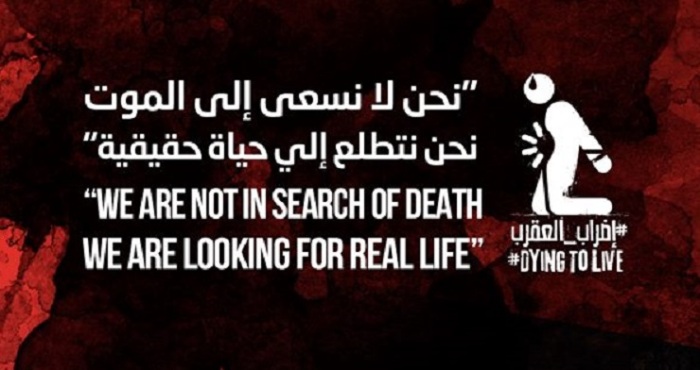 Dozens of detainees as the Aqrab maximum security prison in Egypt were on hunger strike by the beginning of March 2016, according to relatives. The Association of Aqrab Detainees’ Families said in a statement on its Facebook page that prisoners at the jail, notorious for its brutal treatment of inmates, were demanding improved food and water, regular access to family visits and the right to leave their cells. According to the Association, 30 detainees began an open-ended hunger strike on 28 February.

Journalist Abdullah El-Shamy, himself a former political prisoner who went on hunger strike in protest at his detention for ten months without trial, issued a video message of support for the hunger strikers.

“Dozens of prisoners in Aqrab are dying slowly every day,” he said, “support their right to life, stand with them”.

Nine journalists began the hunger strike campaign in Aqrab on 26 February. Magdy Hussien, Hassan al-Qabani, Ahmed Sabea, Hany Salah Eddin, Khaled Shalaby, Ahmed Salah, Mohamed Nwareg, Hossam al-Sayed, and Hesham Gaafar wrote an open letter to the Egyptian Journalists’ Union calling on their colleagues to take action in protest at abuses and poor conditions in the prison. Khaled al-Balshy of the EJU told independent news site Mada Masr “We are really concerned about the prison conditions for all inmates at Aqrab Prison, not just the journalists.” The EJU had sent protest letters to the prison authorities condemning the “inhumane conditions” for inmates, he said.

Egypt is now the second worst jailer of journalists worldwide, according to press freedom watchdog, the Committee to Protect Journalists. Photojournalist Shawkan (Mahmoud Abu Zeid) has been detained for over 900 days. His first court hearing was in December 2015, more than two and a half years after his arrest as he covered the Raba’a massacre in 2013. He is on trial in a case with 738 others.