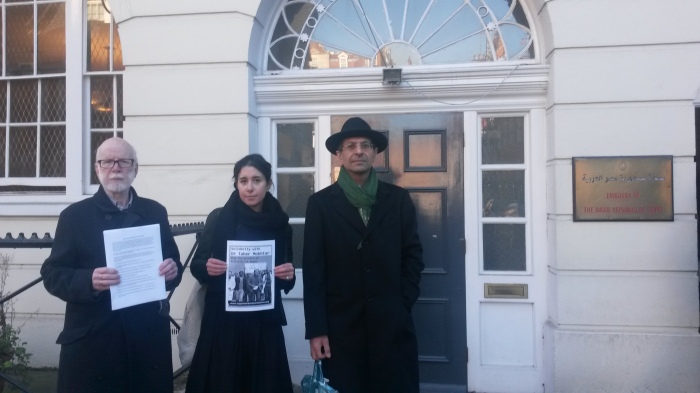 Dr Ron Singer, Chair of the Medical Practitioners’ Union, Dr Mona Kamal Ahmed and Dr Kambiz Boomla delivered letter signed by over 200 doctors, nurses, academics and trade unionists to the Egyptian embassy in London yesterday in protest at the detention of Dr Taher Mokhtar, an activist within the Egyptian Doctors’ Union and a campaigner for the rights of political prisoners. Medical practitioners from the UK, USA, the Netherlands, Greece and Ireland are among the signatories to the letter, which calls of Mokhtar’s immediate release, following his arrest on 14 January. According to his lawyers, Mokhtar is facing charges related to possessing leaflets opposing the current military regime.

“Taher has played a key role in defending doctors’ and patients’ rights in Egypt, both as a leading activist with the Doctors’ Union and as a tireless campaigner for Egypt’s public health service,” notes the statement. “He is also an outspoken critic of the current military regime who has taken a courageous public stand in solidarity with victims of state repression across the political spectrum.”

Embassy staff appeared confused by the delivery of the statement, at one point accepting the envelope addressed to the Ambassador before then returning it saying they refused to accept a delivery in person and asked for it to be sent in the post.

Leaders of the BMA’s Junior Doctors’ strike, including Dr Yannis Gourtsoyannis and Dr Jeeves Wijesuriya are backing the statement, alongside Danielle Tiplady of the student nurses’ NHS bursary campaign.

“I have signed this letter about the detention of Dr Taher Mokhtar because I believe that everyone has the right to speak out, particularly when they speak out on behalf of others, particularly as a doctor whose motives are clearly directed towards the well being of patients and of other doctors.  Although I have signed in a personal capacity I am confident that members of my Union  -Doctors in Unite-MPU, would agree with my supporting Dr Mokhtar as a colleague, a trade unionist and most importantly as a brave human being.”

“Any doctor anywhere in the world fighting for a better health service, peace, freedom and social justice deserves our support. I support Dr Taher Mokhtar and demand his release.”

South London-based forensic psychiatrist Dr Mona Kamal Ahmed highlighted the connection with the wider crackdown on protests in Egypt, which human rights activists say has intensified in the run-up to the anniversary of the 2011 uprising:

“As a fellow doctor and Egyptian citizen I owe a debt of gratitude to Taher Mokhtar- for his campaigns to improve public health care in Egypt and to improve conditions for health workers, and particularly for his courage in seeking justice for victims of police violence.

I call for his release and also call for an end to the repressive practice of forced disappearances and military trials by Al-Sisi’s regime. These brutal practices, which exist to silence legitimate  criticism and dissent, are effectively erasing human rights gains made during the 2011 uprisings and must be opposed.”

Mokhtar is one of a number of doctors currently detained in Egypt for alleged political offences. The World Medical Association issued a statement on 18 January calling for the release of vascular surgeon Dr Ahmed Said who was jailed for two years recently for allegedly “assembling without a permit”. WMA President Sir Michael Marmot said in a letter to the Egyptian Minister of Justice:

“According to our sources, Dr. Ahmed Said was tortured on the day of his arrest while interrogating him at Abdeen Police Station Prison complex, just south of Cairo. He is in an overcrowded cell and sleeps on a concrete floor without a blanket or warm clothing during what is the coldest time of the year in Egypt.”

Following his arrest, Mokhtar was also held in Abdeen Police Station. Colleagues in the Egyptian Doctors’ Union believe that he was targeted for arrest because of his work campaigning for detainees’ access to treatment. Dr Mona Mina, a leading figure in the Doctors’ Union stated:

“The real “crime” which Taher is being punished for is his participation in the union’s efforts to ensure prisoners have access to healthcare.”