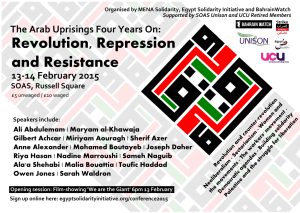 In a few days time we will be hosting activists from across the Middle East at our conference on 13/14 February to debate and discuss what is happening in the region and explore ways to build a stronger movement in solidarity with those who are continuing, despite all the difficulties, to work for change from below and keep alive the demands of January 2011 for ‘bread, freedom and social justice’.

Maryam al-Khawaja is a Bahraini activist whose determination to expose the human rights abuses committed by the ruling monarchy remains unshaken, despite being sentenced to a year in jail in absentia in December 2014. She is Co-Director of the Gulf Center for Human Rights which works to provide support and protection to human rights defenders in the Gulf region by promoting freedom of expression, association and peaceful assembly.

Owen Jones is a columnist and author of author of Chavs: The Demonisation of the Working Class and The Establishment – And How They Get Away With It

Sherif is an Egyptian human rights activist and PhD student at the University of York. He is Assistant Secretary General of the Egyptian Organisation for Human Rights. Sherif was also the Middle East and North Africa Protection Coordinator of Front Line Defenders, an international organization based in Dublin with the specific aim of protecting human rights defenders at risk.

Gilbert Achcar is Professor of Development Studies and International Relations at SOAS and the author, among other books, of The People Want: A Radical Exploration of the Arab Uprising (2013, 2nd edition forthcoming in 2015).

Sameh Naguib is a leading member of the Revolutionary Socialists in Egypt. He is the author of The Egyptian Revolution (Bookmarks, 2011) and has written widely on Egypt’s economy and political movements.

Riya Hasan is a Palestinian activist and journalist based in London

Toufic Haddad is editor and co-author of Between the Lines: Readings on Israel, the Palestinians, and the U.S. “War on Terror” (Haymarket Books, 2007). His writings have been published widely on Jadaliyya, the Journal of Palestine Studies and International Socialist Review.

Anne Alexander is a founder of MENA Solidarity and Egypt Solidarity Initiative and the co-author (with Mostafa Bassiouny) of Bread, Freedom, Social Justice: Workers and the Egyptian Revolution (Zed, 2014).

Moroccan civil servant and trade unionist Mohammed Boutayeb is a former leading student activist and political prisoner, and a member of the revolutionary socialist group, Al-Mounadil-a. He was jailed by the Moroccan authorities between 2004 and 2007 for his activism on campus. He lives in Rabat, and is an official representative of the Democratic Current and a member of the main union council of the Union Marocain du Travail (UMT).

Nadine Marroushi is a British Palestinian journalist. She lived and worked in Egypt between 2011 and 2014. She has worked for Bloomberg, the English edition of Al-Masry Al-Youm (also known as Egypt Independent), and as a freelance journalist writes for The National newspaper in the UAE, and the London Review of Books blog. She has been published by the Financial Times, and other international publications. She was also a volunteer twice with the Operation Anti Sexual Harassment/ Assault Initiative (Opantish) in Cairo.

Sai Englert is a PhD student at SOAS and an activist with the SOAS Boycott, Divestment, Sanctions campaign

John Horne is a PhD candidate in visual culture at the University of Birmingham and a founder of Bahrain Watch. His thesis is on the “Western” spectator and the Arab Spring. He is the community director of EA WorldView, where he is also a staff writer.

Sarah is Core Campaign Coordinator at Campaign Against Arms Trade (CAAT) which works to end the international arms trade.

Miriyam Aouragh is Leverhulme Fellow at the University of Westminster. She researches and teaches on cyber warfare and grassroots political movements and the internet in Arab world.

Ali Abdulemam is a renowned Bahraini blogger, and former prisoner of conscience. In 1999, he created the pro-democracy news website Bahrain Online, the nation’s first free online forum for political and social debate. During the Government’s crackdown in March 2011, Abdulemam was forced into hiding, and sentenced in absentia to 15 years in prison for “plotting a coup.” He escaped to the U.K., where he was granted political asylum. Abdulemam is a 2011 Human Rights Watch Hellman/Hammet awardee, and the winner of the 2012 CEPOS Freedom Award.

Ala’a Shehabi is a British-born Bahraini researcher and writer, and a founder of Bahrain Watch. She has a PhD from Imperial College London, and is a former policy analyst at Rand Europe, and an economics lecturer at the Bahrain Institute for Banking and Finance. She is currently an ACSS research fellow. She lives between Bahrain and the UK.