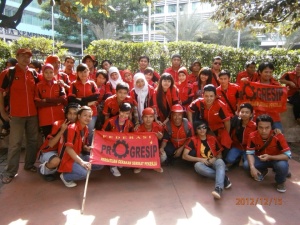 By Feiyi Zhang and Vivian Honan

Indonesia has experienced a rising wave of class struggle and workers strikes. Like the Egyptian workers’ movement, Indonesian unions and left-wing organisations are fighting for basic workers’ rights and freedoms.

The following Indonesian left groups and unions have passed a motion to condemn the Egyptian military regime for its attack on democratic rights and political opponents; and condemn the jailing of Mahienour el-Masry and other Egyptian political prisoners and call for their immediate release:

The National Central Labour Movement (SGBN), an Indonesian union confederation working to unite the movement of workers’ resistance and struggle.
The Progressive Union Federation (Federasi Progresip), an Indonesian union federation consisting of affiliate unions from the industrial areas of Bekasi and Jakarta. The union is active in the national movement and in the struggle at the workplace level for higher wages and secure jobs.

The Joint Workers’ Secretariat (Sekber Buruh), an alliance of left-wing unions based in Jakarta. Sekber Buruh was involved in building for and organising the Indonesian national strikes of 2012 and 2013.

KPO PRP ( Kongres Politik Organisasi Perjuangan Rakyat Pekerja), a socialist organisation active in the growing workers’ movement in Indonesia. It has members across Indonesia involved in struggle for a better world.

The motion has also been endorsed by Michael Thomson, President of the University of Sydney National Tertiary Education (NTEU) Branch. The NTEU is currently fighting a campaign to stop education cuts in Australia.

(i) that the Egyptian military regime has introduced repressive laws attacking the right to public assembly and freedom of expression and in particular has banned the right to protest without permission of the Egyptian authorities;

(ii) we note that lawyer and Revolutionary Socialist activist
Mahienour el-Masry and 8 other activists have been sentenced to two years jail for organizing a protest in 2013 outside of the trial of a police officer who murdered a political blogger, Khaled Said;

(i) condemn the Egyptian military regime for its attack on democratic rights and political opponents; and

(ii) condemn the jailing of Mahienour el-Masry and other Egyptian political prisoners and call for their immediate release.