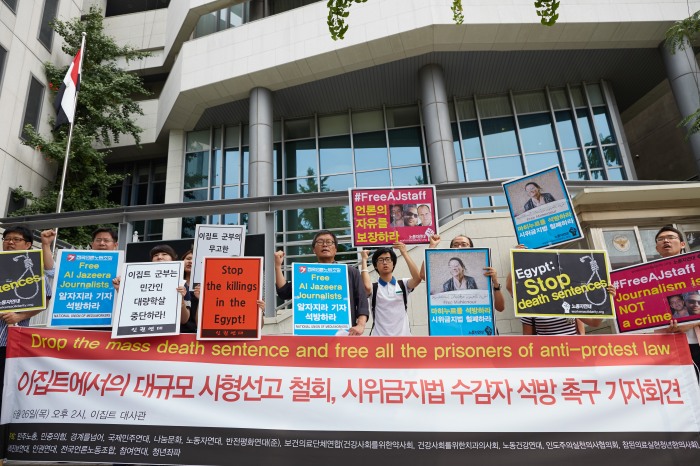 Trade unionists and activists in South Korea protested at the Egyptian embassy in Seoul on 26 June, calling for the release of #noprotestlaw detainees, including Mahienour el-Masry, Alaa Abdel Fattah, Yara Sallam and Sana Seif. They also condemned the jail terms handed down to Al Jazeera journalists Peter Greste, Baher Mohamed and Mohamed Fahmy and the confirmation of death sentences against 183 Muslim Brotherhood supporters.

The protest was supported by the Korean Confederation of Trade Unions and the National Union of Media Workers. NUMW leader Kang Seong-nam said in a speech at the protest,

Egypt was the center of freedom and revolution in Arab world in 2011. All the people around the world looked up Egypt, but due to trial and error new dictatorship have emerged now and the people are being repressed once again. The freedom of press in Egypt have is now crushed. I have met Al Jazeera journalists several years ago and said that I envy their system and courage to practice freedom of press. And now they are being imprisoned and the court have sentenced 10 years. The retreat of democracy is not an issue for a single country but for all the countries in the world. We will keep up the international solidarity and deliver our strongest message for democracy of Egypt through international media organizations. We wish that Egyptian people will once again display the new courage. We condemn the violence repression of the current Egypt government and express our solidarity to Egyptians.