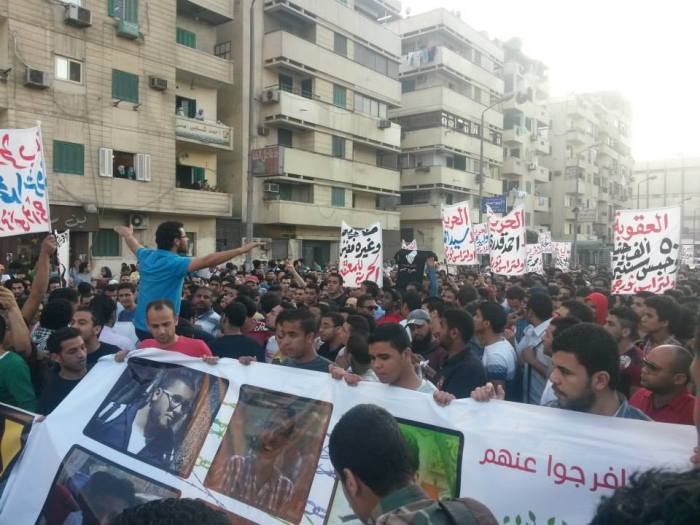 Thousands of activists marched to al-Ittihadiyya presidential palace in Cairo on 26 April to demand the release of political prisoners and against law which criminalise protest.

Tens of thousands of Egyptians have disappeared into the prison system during the crackdown of recent months. Unknown numbers are being held without the knowledge of their families or lawyers in what London’s Financial Times calls “Egypt’s black holes“: secret security prisons and torture centres. Meanwhile hundreds of alleged supporters of the Muslim Brotherhood have been condemned to death in rulings which have sparked international condemnation.

High profile prosecutions have also targeted well-known activists, including leading figures in the 6th April Youth Movement who were jailed in December last year, and Mahienour el-Masry from the Revolutionary Socialists in Alexandria who is appealing a two-year prison sentence.

Saturday’s protest was organised by the Revolutionaries coalition (Thuwar), which brings together many of the activist groups opposed to the military who are not affiliated with the Muslim Brotherhood.