Dozens of high profile trade unionists from the UK and Greece are among the latest to back the campaign in solidarity with arrested labour lawyer Haitham Mohamedain who was seized by the Egyptian security forces on 18 May in a series of arrests targeting critics of the Sisi regime. His detention was recently renewed for another 15 days. Middle East Solidarity stalls at the annual congresses of the PCS civil servants union and the university and college workers’ UCU union distributed campaign postcards and gathered signatures for the petition demanding Haitham’s release.

Backers for the campaign in PCS include:

UCU outgoing president President Joanna de Groot, incoming President Douglas Chalmers and several members of the national executive have also signed the statement in solidarity with Haitham, which has been widely circulated to the union’s members.

As a member of a union, I believe that a voice for social justice is a democratic right that is deserved by one and all. Anyone disempowered or sanctioned for exercising their human rights to freedom of speech needs our full support. Haitham Mohamedain has been denied and jailed for exercising his fundamental rights, he must be freed now!” 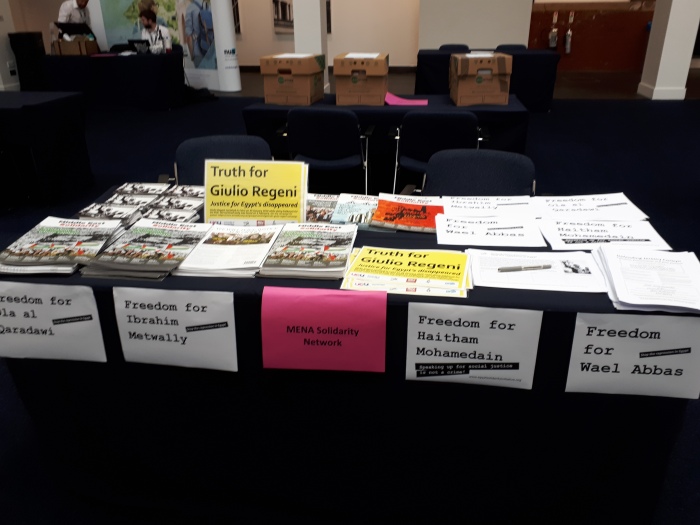 Irini Fotelli, member of the steering committee of Federation of TV and radio workers unions

Costas Pittas, secretary, Federation of civil servants unions in the Ministry of Development

Yiannis Theocharis, member of the steering committee, Federation of Metalworkers of Greece

Thanasis Diavolakis, member of the steering committee, Federation of Teachers in Private Schools.